Forces Greater Than Ourselves

Sooner or later we come into contact with ‘forces greater than ourselves,’ which if we’re not ready for them can sweep us up before we know what’s happened. The created world holds a litany of awesome forces –– oceans, deserts, mountains; behemoths, leviathans; the cosmos; all majestically dwarf us. Consider love, the love of an other, or for that matter truly loving anything, is a willing entrance into uncharted territory defined as much by what we don’t know and our deep vulnerability as anything else. Then there’s God, unknowable yet present in every moment of our lives, how are we to step up in encounters with her? Daunting to be sure, but this is the situation we find ourselves in. So is there a stance we can adopt that might keep us from being overwhelmed and at the same time set us up to be receptive to what these great forces might have for us?

I suggest humility is the answer. Humility puts us in the best position to engage with life as it finds us, causing us to develop an inner strength that grows out of what already exists within us. Self confidence is most directly originates from humility. The word itself comes from ‘humus,’ the soil, that lowly easily taken for granted substance we call dirt. It’s a wonderful irony that humility is perceived in such lowliness when in fact it serves as a condition which brings about strength and courage.

As humans, though, we need first to make a shift in our tendency towards a certain arrogance. In his 2005 commencement address at Kenyon College, the late author and professor David Foster Wallace describes the peculiarly human inclination to presume we are the center, the focus and the meaning of life on Earth. Wallace said: 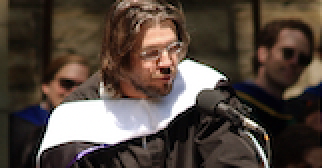 “Here is just one example of the total wrongness of something I tend to be automatically sure of: everything in my own immediate experience supports my deep belief that I am the absolute center of the universe; the realest, most vivid and important person in existence. We rarely think about this sort of natural, basic self-centeredness because it’s so socially repulsive. But it’s pretty much the same for all of us. It is our default setting, hard-wired into our boards at birth. Think about it: there is no experience you have had that you are not the absolute centre of. The world as you experience it is there in front of YOU or behind YOU, to the left or right of YOU, on YOUR TV or YOUR monitor.”

Not you, not me, not a single one of us are the center of the universe. Thank God, because we’d make a hash of it anyway. Setting aside such a ludicrous assumption doesn’t make us less, though, but opens up the possibility that more of us can become available. Absent this preposterous misconception, we immediately become more real, and in the bargain gain lots of company. Accepting our rightful place out of the center but on the periphery aligns us with each other, disclosing our dependence on and connection with one another. You are essential to the plan of the universe, just not its center.

The theologian and philosopher Augustine, Bishop of Hippo, whose writings have influenced most of Western thought and just about all Christian Church doctrine, observed that “all humility consists in knowing yourself.” In his Confessions, Augustine described humility as wisdom brought to its perfection.

Several centuries earlier Confucius, in much the same light wrote that humility is about learning and facing one’s limitations. Both suggest if we bravely face the truth of ourselves, including the sobering reality of our place within creation, humility begins to become our nature.

What humility is not is weakness. The Scottish philosopher David Hume lumped humility in with several other characteristics he ridiculed as “monkish virtues.” Humility is not submissiveness, it’s not self-abnegation, but it is a fearless acceptance of our place in creation. We aren’t its center, and neither are we an afterthought in the order of things. Our place in creation is to engage in it to the fullest, ours and hers.

Aquinas, in his Summa Theologiae, writes that humility is essential because it makes one open to God’s grace. Put another way, humility is essential because it puts us in right relationship to reality. It is only by way of grace we enjoy our gifts of life and talent. So if humility further opens us to receive more of these, I say do what it takes to make this more likely. Bono, in U2’s Mysterious Ways suggests one approach to go about this –– he tells ‘Johnny,’ and the rest of us, how to engage with the wonders of life,

“If you want to kiss the sky, better learn how to kneel, on your knees boy!”

Now if there is one posture not exactly predominant these days it would have to be ‘on our knees.’ But consider the immensity of our world, the mysteries of the universe, and if you really want to stretch yourself, consider God –– where and how is it we ought to stand in relation to these? Possibly we shouldn’t stand at all, but get on bended knees.

In her article for the Heythrop Journal, How Opposites (Should) Attract: Humility As A Virtue For The Strong, Catherine Hudek Klancer of Boston University compares the ethics of humility of near contemporaries Aquinas and Confucian master Zhu Xi.

Describing Zhu Xi’s view of a person on the path towards “sagehood,”, Klancer writes the movement towards humility is away from thinking themself “the center or the apex of the universe, but rather to bring themselves into alignment with forces far greater than they are.” Choosing to kneel in the face of such forces does not diminish one’s self but empowers. Much like Job, It is an act that says, ‘we are not equals, but I am equal to the encounter.’ Acting in such alignment with great forces, Biblical scholar Walter Brueggemann, says “… is a demanding way to live that thrives on candor and requires immense courage.”

Augustine reminds us that knowing oneself and humility are intimately connected, bringing about ‘perfect wisdom.’ Wholeness becomes the operative word here, we live courageously in what’s real, vulnerable but yet strengtherned by the openess of our situation. “Be not afraid” is no empty boast at this point but the inner condition humility has brought about.

Humility, far from a ‘monkish virtue,’ is an attitude towards life that puts us in a position to meet with ‘forces greater than ourselves.’. Humility reshapes us to be simpler in disposition, strengthened by what’s true, free from misconceptions, and most especially, open to what those great forces have in store for us.

Courage, strength, and self confidence, who would have thought these to be the fruits of humility.