When I think of confident people, they are invariably cool, unflappable, even insouciant, but they carry themselves with an authority that those of us around them find compelling. Picture Martin Luther King Jr. as he led a walk with five thousand demonstrators; or fourteen year old Greta Thurnberg, addressing a conference of UN aristocrats, many of whom older than her grandparents, saying “How dare you!” to their pathetic response to climate change. Ms. Thurnberg and Dr. King leave no doubt about what it is that matters to them. What had been instilled within both became the defining nature of their engagement with the world. Each of us can live authentically too, when there is no distance between what resides within and our persona in the world. Besides being the author of the one and only life we have, we get to live out what matters most to us.

What can we draw from so as to leave no doubt about who we are and what we care about?

The US Marine Corps has a good idea what. Their creed, Semper Fidelis, defines living confidently. Semper Fidelis, Always Faithful, has described the ethos of the Corps for generations. Fidelis, fidelity, describes an act of trusting in something so fully that we have decided it is worthy to give our hearts to.

So the question becomes, what is it we declare our semper fidelis to? What have we decided is an object or a project worthy enough to give our heart to? The answer is right there in front of you. It is you, in all your goodness, in all your faults, in everything that makes up the all of you. 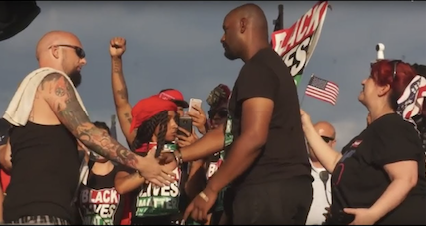 “To thine own self be true.” (Above) Polonius giving advice to his son Laertes, Hamlet

Two remarkable people come to mind who embodied their version of semper fidelis. When Katherine Johnson wrote the research paper providing the mathematical calculations for NASA that made possible the coordination of the Apollo lunar module with the orbiting Command module, she was embodying a fidelity to her truest self. Her brilliant career with the space program was founded on her love for math. The first African American woman to enroll in West Virginia’s graduate schools, she spent her entire career opening doors previously barred to a person of color, not to mention the barriers she overcame as a woman in the overwhelmingly male environment of early NASA. After 33 years with the space program, she retired, saying, I loved going to work every single day. She received the Presidential Medal of Freedom in 2015, at age 97. 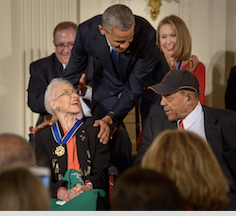 How fitting that Ms. Johnson’s medal would be labelled Freedom. She lived and worked in fidelity to a gift revealing what resided in her heart, leading her to a life she could unequivocally say she loved. That each of us would be so blessed.

Paul Kitagaki Jr., a photojournalist with the Sacramento Bee, has created a photographic record of the people, including his parents and family, affected by Executive Order #9066, FDR’s decree in 1942 to round up and incarcerate US citizens of Japanese descent. Kitagaki describes the 30 plus year project as, … a labor of love, matching current photos of survivors with the historic photos of them taken in 1942. The exhibition, entitled Gambatte! Legacy of an Enduring Spirit, has exposed the injustice of the forced internment and its enduring effect on the people’s lives. And fortunately for us, Mr. Kitagaki has revealed what matters to him – the internees themselves, whose humanity forces us to lament the evil of their incarceration and at the same time be humbled by their courage and integrity. 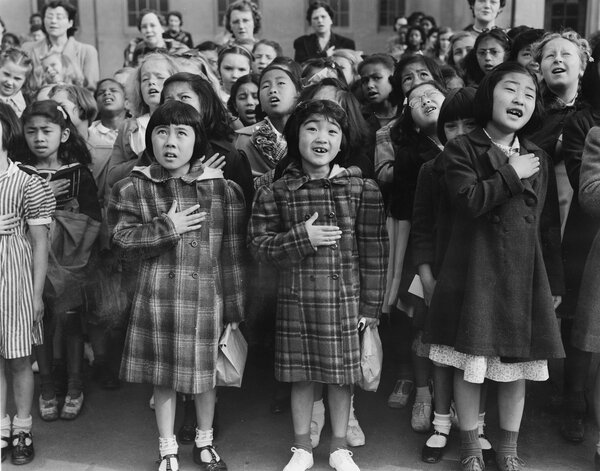 (Above) Pledge of Allegiance One Nation Indivisible, San Francisco (Pledge of Allegiance at Rapael Weill Elementary School a few weeks prior to evacuation to internment camp.) Dorothea Lange Collection, the Oakland Museum of California. Gift of Paul S. Taylor

These two, Katherine Johnson and Paul Kitagawi Jr., discovered a passion within themselves that could not but be brought forth. The fidelity to their own ‘enduring spirit’ is their legacy. Few of us received the wisdom of Polonius when we set out in life, but we are heartened when we live in fidelity to our ‘enduring spirit,’ truly knowing that what resides within us has been planted there to be shared.

What is residing right now within you whose time has come to be brought into the light? Do not delay, trust in what matters to you, our world could do with some heart at the moment.